Seagulls & other birds spread diseases such as Escherichia Coli, Lysteria and Salmonella, they damage buildings and vehicles with their corrosive droppings which may carry pathogenic micro organisms, in general bird nests and nest sites are infested with fleas and other insects. 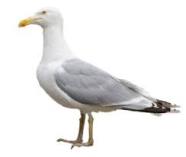 Herring Gulls (Seagulls)  Pairing for life, gulls are productive breeders with two birds raising up to 30 chicks over a ten year period. Mating generally begins with the birds identifying nesting sites in February each year, with the actual breeding season running from March to the end of July with a typical clutch of three eggs laid in April/early May. Traditional attempts to control urban gull populations have either been undesirable, unsuccessful or both. Gulls easily become accustomed to frightening devices such as electronic bird ‘scarers’ which play distress calls of predators, and they often ignore undersize spikes designed to prevent other species of birds from landing. Research shows that urban gulls will accept plastic imitation eggs in place of their own in the nest, gulls tend to incubate them for twice the normal incubation time (56-60 days) and when the eggs are finally rejected, the nests are abandoned without replacement eggs or nests occurring. Whilst incubating the imitation eggs, the gulls are quiet and less aggressive, reducing annoyance and attacks.

You, Herring Gulls & the Law Herring Gulls are protected under the Conservation of Wildlife (Jersey) Law 2000. This makes it illegal to intentionally injure or kill any gull or to take, damage or destroy an active nest or its contents. The law does recognise that in some circumstances control may be necessary and action can be taken to ensure public health and safety. This is done by licensed individuals who adhere to strict codes of conduct. CBM Services is a licensed pest control company operating in Jersey whose services include the substitution of eggs along with the removal of roof-top gull nests and eggs during the breeding season.

Crows
Crows are believed to be the most intelligent of all birds. When trying to open nuts, it will purposely place them in the roadway so cars will crack them open. Crows are identified by their black feathers, black eyes and the caw-caw sound they make. Adult crows have a light violet gloss on their body and a greenish blue gloss on their wings. Crows thrive mainly on corn, thus the reason scarecrows are put up in corn fields as well as other food crops and gardens. They damage corn crops by tearing open the cobs and exposing them to the weather. These birds can be seen sometimes following a plough so that they can feast on exposed earthworms. Crows are most notorious for the methods they use for feeding on farm animals as well as wild life. They frequently peck out sheep and lambs eyes and tongues rendering them unsalable as well as in great pain. If the animals are not found quickly, the crows will descend and feast on the whole animal whilst still alive. Control is best using Larsen Traps & conventional methods.

Magpies Magpies are black-and-white bird with a very long tail. It is a member of the crow family. When the wings are folded, the magpie has a white breast and a white patch in each side. Magpies live on insects, grubs, berries and carrion, with occasional frogs and snails. They have also been known to kill small pets such as baby guinea pigs. Magpies supplement their diet in the breeding season by raiding nests of smaller birds and eating the eggs and baby chicks. Their numbers have increased by 112% over the last 30 years and they are now the 13th most commonly seen bird in British gardens. Whilst most bird protection organisations struggle to explain why songbirds are declining so rapidly in Britain, many enlightened observers believe magpies and carrion crows are a significant part of the problem. Control is best in the spring using Larsen Traps & conventional methods.

Pigeons  Pigeons can be very damaging to buildings and their occupants. Their fouling is very corrosive and unsightly. It harbours and sustains infestations of flying and biting insects and mites and poses a serious health risk, in particular respiratory and intestinal infections caused by bacteria and fungal spore’s Roosting bird are normally removed in one visit using conventional methods.

Pheasant  While the Common Pheasant is not indigenous to the island of Jersey it is protected under the Conservation of Wildlife (Jersey) Law 2000, a license  is required to control their numbers; they were introduced into Britain from western Asia by the Romans & Normans but became extinct in the beginning of the 17th century. It was introduced again & rediscovered as a game bird in the 1830s & crossed the channel to Jersey in the early 21st century with the help of prospective game shooters. Ring-neck pheasants can be found on farmland feeding on a wide variety vegetable & animal foods some examples would be; fruits, seeds, potatoes, lizards, snakes & from time to time birds. Control is by conventional methods.